Charlie McKinney is the Publisher of Sophia Institute Press and President of Sophia Institute for Teachers, CatholicExchange.com, CrisisMagazine.com, and EpicPew.com. Charlie is a convert to the Catholic Faith and is a regular guest on Catholic radio and television. He and his wife have four children and they reside in New Hampshire. 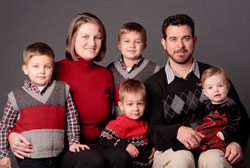 Sophia Institute Press publishes and distributes faithful Catholic classics and new texts by the great enduring figures of the Catholic intellectual tradition. In 30 years, we have published 300 titles and distributed 3 million books worldwide to hundreds of thousands of individuals, bookstores, and institutions.  Sophia’s authors include St. Augustine, St. Thomas Aquinas, St. Therese of Lisieux, Archbishop Fulton Sheen, Dietrich von Hildebrand, and many others.

The Sovereignty of God and the Kingship of Christ

5 things that allowed me to reflect on the royal wedding of Eugenia of...

Discerning God’s Will (Or, now what do I do?)